One of the best books I’ve read in any category this year is Salmon, People, and Place: A Biologist’s Search for Salmon Recovery (http://osupress.oregonstate.edu/book/salmon-people-and-place) by Jim Lichatowich. In the book, Lichatowich convincingly argues for a new way of thinking about salmon recovery but also about how human beings relate to the natural world—what people of faith refer to as “creation.” In an interview with OPB’s Ashley Ahern (http://earthfix.opb.org/flora-and-fauna/article/earthfix-conversation-author-calls-for-philosophic/), he talks about two major ideas that lie at the heart of his argument.

The first is what naturalist John Livingston refers to as the environmental iceberg, i.e., all environmental problems are like icebergs which have a visible part above the water—in the case of salmon the symptoms are dams, poor logging practices, overharvest, misuse of hatcheries, etc. But as with icebergs, there is much greater part that’s under the water and is invisible. It is made up of the myths, beliefs, and assumptions that we bring to any problem. Again, in the case of salmon, this includes our misguided efforts to use hatcheries—literally “fish factories” as they were first called—to have “salmon without rivers” (the title of another book by Lichatowich; http://islandpress.org/ip/books/book/islandpress/S/bo3560726.html). In ignoring these myths and beliefs that make up our “salmon story” we risk the future of not only salmon but the other 140+ species that salmon have created and support in the salmon ecosystem. We will remain largely powerless to address the problem of vanishing wild salmon in an effective way until we examine the part of the iceberg that’s underwater.

The second idea comes from writer Gary Nabhan who believes that species go extinct not because we destroy the last one but because the web of relationships that sustains them unravels. In the case of salmon, their demise is a result of our attempts to manage them and while ignoring the highly complex ecosystem in which they live out their life history and of which they are the keystone species.

Lichatowich believes that in order to “save the salmon” (who may, in turn “save” us) we need a new salmon story, one in which not only salmon numbers are important but in which the entire life history of salmon and the multiple habitats in which that history is lived out are taken into account. You might think of it as an ecological approach to salmon recovery.

Being in the “myth, belief, and assumption” business myself, I find Lichatowich’s ideas to be both a challenge and an invitation. For example, anyone who’s ever worked in a church or other institution knows the power of invisible underlying myths and beliefs because we run up against them every day. He adds new meaning to a perspective that many of us have held for a long time: caring for creation is a profoundly spiritual undertaking and the place to start is with our most basic beliefs about creation and our place in it as human beings. I hope to follow up some of these ideas in future blogposts and I invite you to join the conversation. In the meantime, I highly recommend Jim’s book. jpr 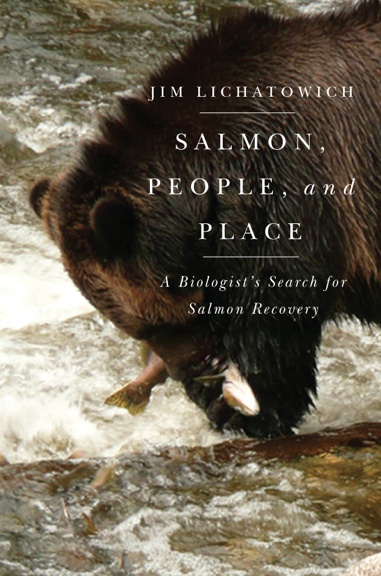 Posted by John Rosenberg at 5:40 AM

John Rosenberg
Angler, author, and minister of hope and adventure on the shores of the Salish Sea.